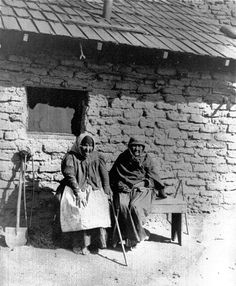 The Tongva (/ˈtɒŋvə/ TONG-və) are an Indigenous people of California from the Los Angeles Basin and the Southern Channel Islands, an area covering approximately 4,000 square miles (10,000 km2).[1][2] In the precolonial era, the people lived in as many as 100 villages and primarily identified by their village name rather than by a pan-tribal name.[3] During colonization, the people were referred to as Gabrieleño and Fernandeño,[a] names derived from the Spanish missions built on their land: Mission San Gabriel Arcángel and Mission San Fernando Rey de España.[b] The name Tongva is the most widely circulated name and gained popularity in the late 20th century. Others choose to identify as Kizh and disagree over use of the term Tongva.[4]

Along with the neighboring Chumash, the Tongva were the most influential people at the time of European arrival. They developed an extensive trade network through te'aats (plank-built boats) and a vibrant food and material culture based on an Indigenous worldview that positioned humans, not as the apex of creation, but as one strand in a web of life (as made evident in their creation stories).[5][1][2][6] Over time, different communities came to speak distinct dialects of the Tongva language, part of the Takic subgroup of the Uto-Aztecan language family. There may have been five or more such languages (three on the southernmost Channel Islands and at least two on the mainland).[1] European contact was first made in 1542 by Spanish explorer Juan Rodriguez Cabrillo, who was greeted at Santa Catalina by the people in a canoe. The following day, Cabrillo and his men entered a large bay on the mainland, which they named "Baya de los Fumos" ("Bay of Smokes") on account of the many smoke fires they saw there. This is commonly believed to be San Pedro Bay, near present-day San Pedro.[7]

The Gaspar de Portolá land expedition in 1769 led to the founding of Mission San Gabriel by Christian missionary Junipero Serra in 1771 and initiated an era of forced relocation, enslavement, and exposure to Old World diseases.[8] This led to the rapid collapse of Tongva society and lifeways.[9] Resistance and rebellions occurred in retaliation, including an unsuccessful rebellion in 1785 by Nicolás José and female chief Toypurina.[1][3] In 1821, Mexico gained its independence from Spain and secularized the missions, selling mission lands to ranchers and forcing the Tongva to assimilate.[10] Most became landless refugees during this time.[10] In 1848, California was ceded to the United States following the Mexican-American War. The US government signed 18 treaties between 1851 and 1852 promising 8.5 million acres (3,400,000 ha) of land for reservations. However, these treaties were never ratified,[11] and were negotiated with people who did not represent the Tongva and had no authority to cede their land.[12] During American occupation, many of the people were targeted with arrest and used as convict laborers in a system of legalized slavery to expand the city for Anglo-American settlers, who became the new majority in 1880.[10]

In the early 20th century, an extinction myth was purported about the Gabrieleño, who largely identified publicly as Mexican-American by this time. However, a close-knit community of the people remained in contact with one another between Tejon Pass and San Gabriel township into the 20th century.[8][13] Since 2006, four organizations have claimed to represent the people: the Gabrielino-Tongva Tribe, known as the "hyphen" group from the hyphen in their name;[14] the Gabrielino/Tongva Tribe, known as the "slash" group;[15] the Kizh Nation (Gabrieleño Band of Mission Indians);[16] and the Gabrieleño/Tongva Tribal Council.[17] Two of the groups, the hyphen and the slash group, are the result of a hostile split over the question of building an Indian casino.[18] In 1994, the state of California recognized the Gabrielino "as the aboriginal tribe of the Los Angeles Basin."[19] No organized group representing the Tongva has attained recognition as a tribe by the federal government.[11] In 2008, more than 1,700 people identified as Tongva or claimed partial ancestry.[11] In 2013, it was reported that the four Tongva groups that have applied for federal recognition had over 3,900 members collectively.[20] 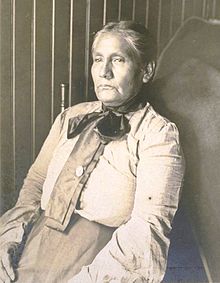 Mrs. James Rosemyre (née Narcisa Higuera), photographed here in 1905, was one of the last fluent Ton…