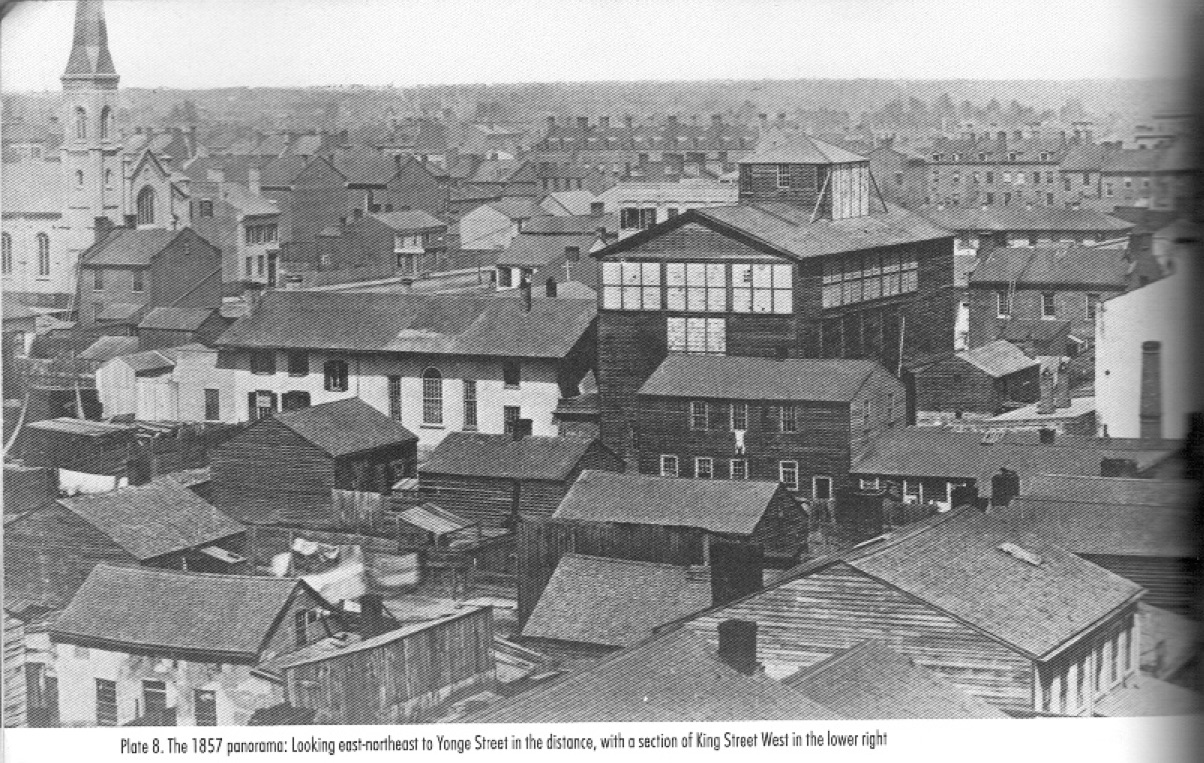 The First Panorama of Toronto

Every aspect of the story behind the series of photographs that make up the 1857 Panorama unravels an intriguing thread. From the three Irish man who photographed them (and then went on to the frontlines of British colonization) to the building from whose roof they was photographed, to the very reason they were taken in the first place.

I came across these photographs while searching the Archives of Toronto for panoramic views of the city. I wanted to find images of landscapes that no longer exist and to overlay them over the current view. This was how I discovered the very first photographs of Toronto, taken in 1857, were actually a panorama. They were commissioned by the city from a newly-formed photography firm called Armstrong, Beere & Hime as part of a bid by the city’s government to the British crown to make Toronto the capital of what would become Canada. Other cities, such as Kingston, Ottawa, Quebec City and Montreal also submitted bids but none had impressive photographs to accompany the documents they sent to Queen Victoria. For unknown reasons, she never actually got to see the panorama, which some speculate contributed to her decision to choose Ottawa instead of Toronto. More than 120 years after it was photographed, the panorama was accidentally found by archivist Joan Schwartz in 1979. After the images were “discovered,” England officially gifted them back to Toronto on its sesquicentennial anniversary.

The three men behind Armstrong, Beere & Hime were all born in Ireland but neither died there. After immigrating to what would become Canada and briefly working together, they went their separate ways. One joined his brother who was heading a white militia in New Zealand. Sponsored by the British crown, the soldiers were promised land in exchange for expelling and fighting off the indigenous Maori. Along with helping his brother fight, Beere took impressive photographs that can be seen on the site of the New Zealand public library.

Meanwhile, Hime joined a Canadian expansionist movement and along with a University of Toronto geology professor named Henry Youle Hind, set off on an expedition in 1858. Its purpose was to prove that colonizing Canada westward was possible. It was on this expedition that Hime would take the photographs that would inscribe his name in Canadian history. You can read more about him in the Canadian Encyclopedia.

The third, William Armstrong, joined a different colonial mission - the Wolseley expedition - a military force authorized by Sir John A. Macdonald to confront and subdue the Red River Rebellion of Louis Riel and the Métis in 1870 which also helped settle the Red River Colony in what is now Manitoba. He then returned to Toronto and became a teacher of what can be best described as mediocre landscape paintings. He died in his home on Augusta Street, in Kensington Market.

But back to the winter of 1857. As the architectural historian William Dendy wrote in his 1979 book Lost Toronto, in January or February, the three men dragged their photography equipment up to the roof of the yet-to-be finished Rossin House Hotel, which at the time was effectively the tallest building in Toronto (at a whopping six floors). On its roof, over a course of a few days, the men took a series of photographs, with each one panning their camera slightly to the right to make a nearly full 360 view of Toronto, as it looked in the middle of the 19th century.

A few months later, the upscale Rossin House Hotel opened its doors but five years after burned to a crisp in the infamous fire of 1862 that left much of the city in ruins. As I was digging through the Toronto City Archives I came across a number of such devastating fires, and was shocked at the extent of the destruction. Though the hotel was rebuilt and reopened, it slowly fell from first place on the city’s list of luxurious “palace hotels” and was demolished in 1969. You can still see the hideous skyscraper that replaced it on the southeast corner of York and King Streets. If you were to go up to the floor just above the lobby (the equivalent of the roof of the Rossin House Hotel) you can see the panorama, as photographed by Armstrong, Beere & Hime and discover how much the city changed since 1857. 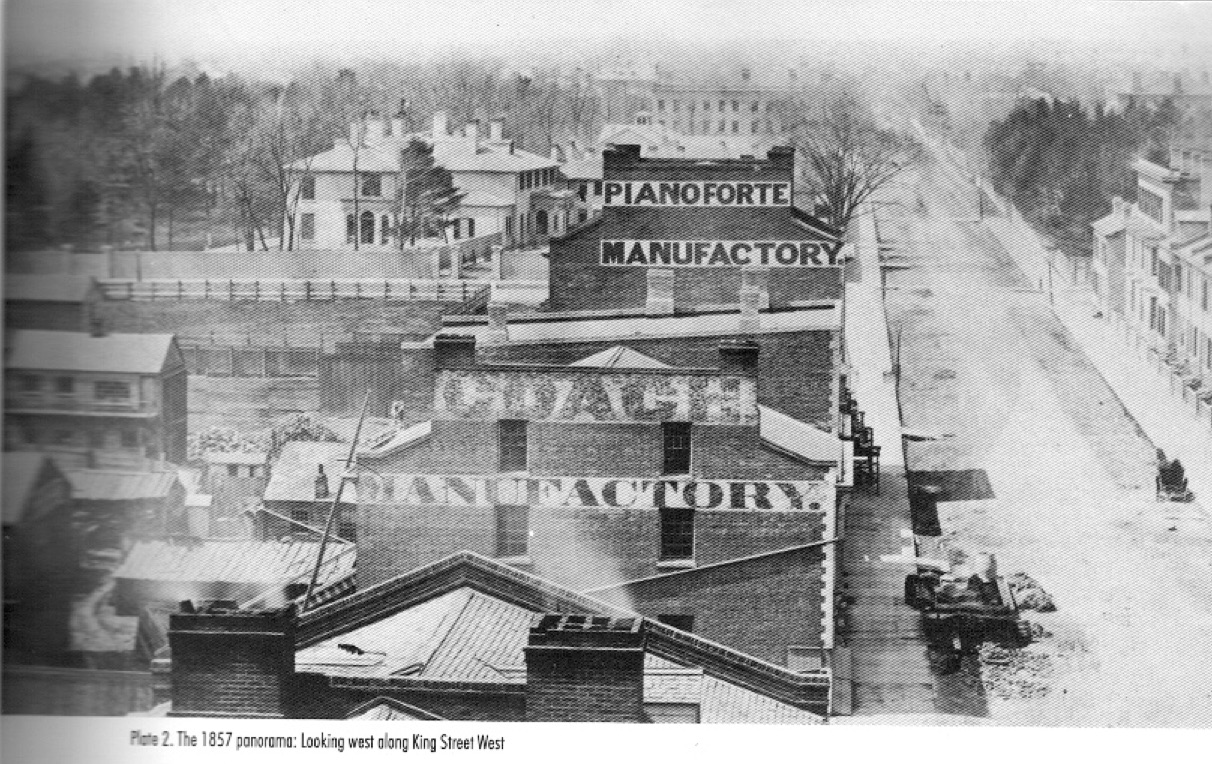 BlogTO - Introduction to the 1857 Panorama 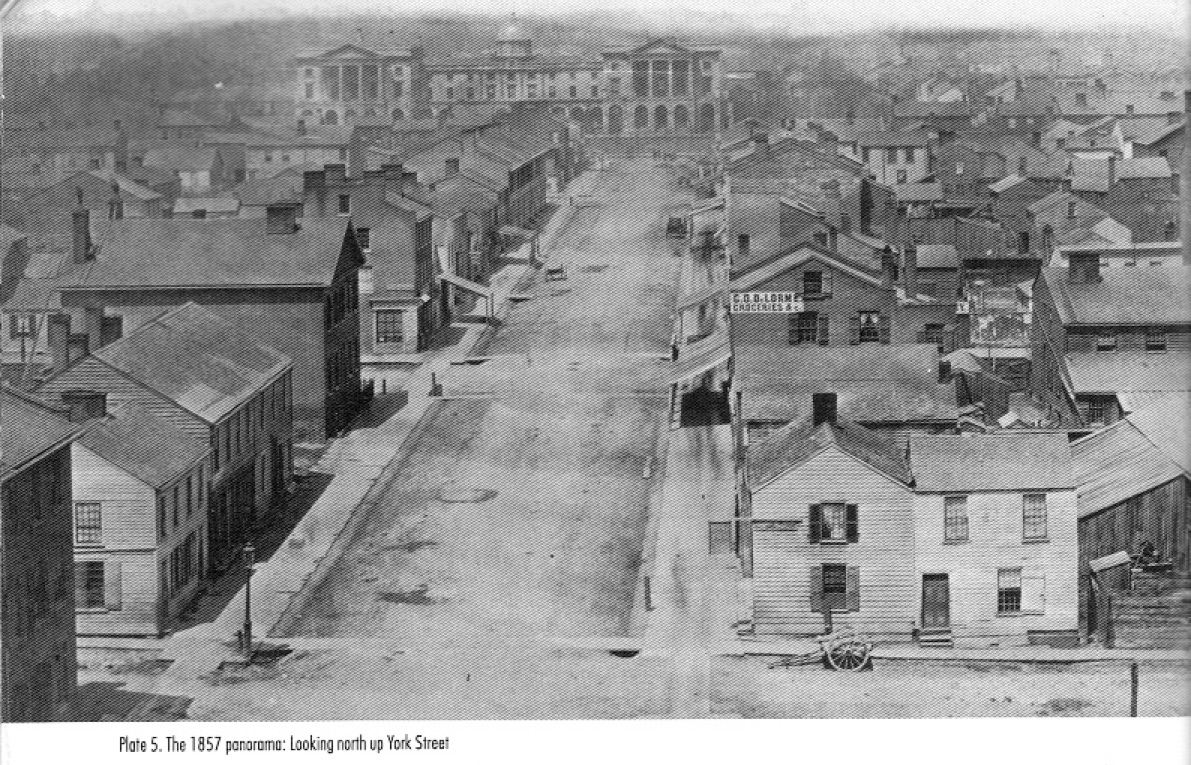 Toronto's Bid to be Capital of Canada

Toronto’s Bid to Be the Capital of Canada Following the Act of Union of 1840, which amalgamated Up… Who were the photographers?

William Armstrong (1822-1914) was born in Dublin, Ireland. He studied art before moving to England w…