The Scores of Lowestoft

Scores are unique to the eastern area of Suffolk, where many ‘beach’ families resided. The scores were believed to have ancient origins and were formed over many years by footsteps eroding paths into the soft sloping cliffs leading to the beach, eventually forming the footpaths, with steps added to some. Although the exact origin of the word score is unknown, it is thought it could be a corruption of ‘scour’ or possibly from the Old English ‘skor’, which means to make or cut a line.

Over the centuries scores were established connecting the beach to the main road through the north end of town. The Beach Village (demolished in a slum clearance program from 1955 to 1960’s) consisted of tiny rows of 17th and 18th century fisherman’s cottages, smokehouses and net yards. The scores formed a vital link between the town and the beach village, which was built on a cliff and joined to the high street above the village by the series of steep scores. The village housed much of Lowestoft’s fishing communities through the centuries.

The original town centre had large elegant 17th and 18th century merchants houses with terraced gardens known famously as the ‘hanging gardens’. Between the houses is where the pathways known as scores appeared. Since the decline of the beach village, the scores are not used so much.

On this map are 11 of the scores that are still mostly complete and easy to access. The Ravine is an obvious name, as it is a very deep cutting in the cliff. Because the Ravine divided… Also known as Gallows' Score. Cart Score gets its name from the fact that it has always been a wide… 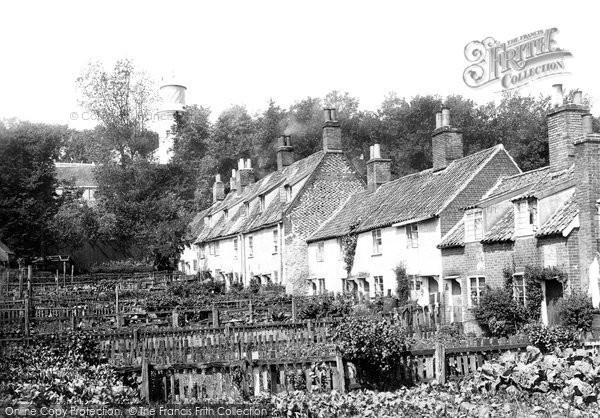 Also known as Lighthouse Hill. This score gets its name from the Lighthouse situated at the top of … Also known as Swan, Scarll and Cross Score. The name Mariners Score could have come from one of two… Also known in the 17th century as Ferney's Score and at one time Lion Score. Ferney's was most like…