Rule of St. Benedict to be immortalized in sculpture garden

October 31, 2021 The Central Minnesota Catholic Around the Diocese, FeatureNo comments

Story and photos by Gianna Bonello

The Rule of St. Benedict is approximately 1,500 years old, and thanks to a new sculpture at St John’s University in Collegeville, the Rule will be immortalized in a special way for even longer.

In between Alcuin Library and the Dietrich Reinhart Learning Commons at St. John’s University in Collegeville lies the new Jon Hassler Sculpture Garden. The garden is home to the “Kura: Prophetic Messenger,” a large sculpture commissioned by SJU pottery director Richard Bresnahan. A dedication and reception was Oct. 22 at St. John’s to bless and celebrate the sculpture.

Inside the “Kura” lies a letterpress printed scroll of the Rule of St. Benedict. The scroll was printed and designed by local artist Mary Bruno of Bruno Press.

“It is by far my most epic work. I’m beyond proud of it,” Bruno said.

The Rule of St. Benedict was written in 516 by St. Benedict of Nursia, founder of the Benedictine order. It is over 90 pages long and details the way of life that all Benedictine monks and nuns should follow.

Bruno’s scroll, which is 36 pages long, was printed completely by hand.

Bruno is the owner of Bruno Press, a letterpress print shop in St. Joseph. She inherited most of the type and the equipment from her father who died in 2003. Her main line of work includes greeting cards, but she also creates fine art prints and event posters and hosts exhibitions.

“It’s pretty much all over the board,” she said.

Bruno said she usually works on a multitude of projects on a day-to-day basis. That is, until Richard Bresnahan approached her about his sculpture project in August 2019.

“It was really cool to just do one thing for a long time,” Bruno said.

Bresnahan is the director of the pottery program at St. John’s and has been the artist-in-residence at the university for 30 years. He boasts an impressive resume of work, including apprenticing under Takashi Nakazato, a master potter in Japan, and operating the largest wood-fired kiln in North America. Richard Bresnahan and Mary Bruno at the Oct. 22 blessing ceremony for the “Kura: Prophetic Messenger” sculpture.

Bruno said she and Bresnahan have become well-acquainted over the years, with him even bringing his students to Bruno’s shop on a variety of occasions.

“We’ve gotten to become really good friends. He respects my work and I respect his work … He’s a pretty cool guy that does pretty amazing stuff,” Bruno said.

Bresnahan wanted to create a sculpture that would be a time capsule of sorts for the garden space, she said. The idea was that if in millions of years there were nothing left, people could open up the sculpture and use what’s inside.

That sculpture is called “Kura: Prophetic Messenger.” “Kura” is a Japanese word that means “storehouse.” Built by Bresnahan, it was the first piece to be installed in the Jon Hassler Sculpture Garden.

Inside the “Kura” are 182 endangered seed types, called the “Three Sisters.” These include corn, squash and beans. The seeds are stored inside ceramic jars which were also made by Bresnahan.

A 224-page book titled “Kura: Prophetic Messenger” was also created, chronicling the creation and inspiration behind the sculpture. In the book, Bresnahan explained how the seeds and scroll represent the two cultures that have cared for the land: the Indigenous population that first identified the land as sacred and the Benedictine monastics that came in the 1850s. The “Kura: Prophetic Messenger” sculpture was officially blessed on Oct. 22 at St. John’s University by Benedictine Abbot John Klassen.

The book also explains how the sculpture is centered around the ideas of eco-mutualism. In the book’s preface, Steven Lemke, the associate director of The Saint John’s Pottery, wrote how the “Kura” serves to connect art, architecture and the environment to the history and the values of the community and the surrounding region.

Bruno’s scroll lies within the “Kura” and among the seeds. It rests on a stand made by Jeff Thompson, a local woodworking artist.

To begin creating the scroll, Bruno and her interns visited the Sisters of St. Benedict to “go to the source,” Bruno said.

She worked with Benedictine Sister Katherine Howard and Sister Michaela Hedican to better comprehend the Rule of St. Benedict and to hear the sisters’ perspective on it, namely, what parts of the Rule stuck out to them the most.

“It was awesome; they were so helpful and so excited about it,” Bruno said. “Richard really just wanted this to be from a woman’s vantage point, about our community, about the sisters, about the work they do.”

The next step was the text.

Bruno reached out to Judy Gilats, who Bruno said has designed text for religious books for 30 years. Gilats helped to design the text and lay it out on 12-inch-by-19-inch pages that would then be glued together to form the scroll. Bruno also worked on designing all 18 of the images in the scroll. Bruno’s scroll, which is 38 feet long, was on display during the Oct. 22 reception. The scroll stand was made by Jeff Thompson, a local woodworker.

The images were meant to highlight the Benedictine sisters and the St. Joseph community, Bruno said in a blog post about the process on her website.

After the text was set, the pages were sent to Boxcar Press, a letterpress company in New York, where they were turned into polymer plates.

Once the plates were sent back, Bruno and her interns began to print the text on a type of paper called Thai Mulberry.

Bruno carved the images out of linoleum and then went back and printed them beforehand, coloring them with watercolor pencils. Finally, Bruno said she applied gold foil to the images before gluing the pages together.

She described the project as “onion layers of complexity.” She and her team made six scrolls in total; one for Bruno herself, one for Bresnahan, one for both St. John’s University and the College of St. Benedict, one for the donors of the sculpture, and the one that is stored in the “Kura” — all by hand.

The “Kura” sculpture was officially blessed by Benedictine Abbot John Klassen in the Jon Hassler Sculpture Garden. Bresnahan, Lemke and SJU transitional President James Mullen also gave short addresses about the project and its significance to the university. The scroll.

Bruno’s scroll was laid out in a 32-foot display case. A video chronicling the creation of the scroll was shown during the reception, and other pieces showing what is inside the “Kura” were on display.

The sculpture was originally installed in the Jon Hassler Sculpture Garden in the summer of 2020, but the pandemic delayed a formal ceremony for it.

“This whole thing finally came to fruition last July so it could be sealed into the sculpture, but with the pandemic no one could see it,” Bruno said. “We couldn’t do anything, so I’ve sort of been sitting on this super-epic project that really I haven’t been able to share at all. This is like a big thrill for me, to finally get a little closure with it.”

Bruno said the prospect of printing the scroll was daunting when Bresnahan asked her.

“I was like what did I just say yes to? But when an opportunity like that comes to you, you don’t really get scared and run away. You [have to] pull it together and get it done and that’s what I did,” she said.

Despite the amount of effort that went into the project, Bruno said she “loved that work” and would want to do it again someday. 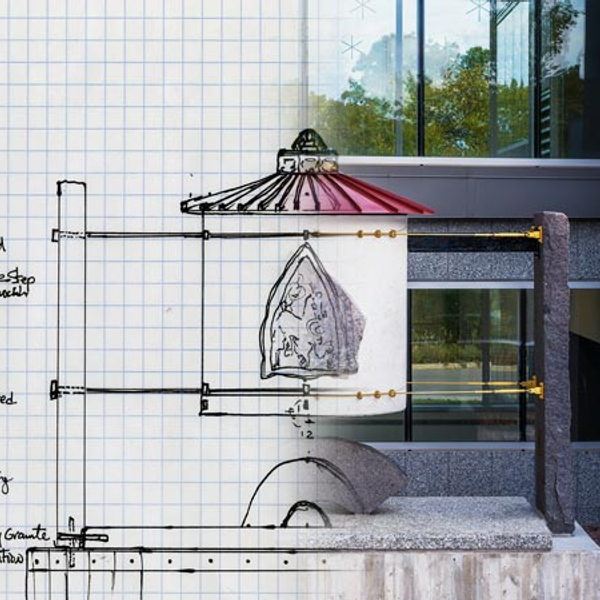